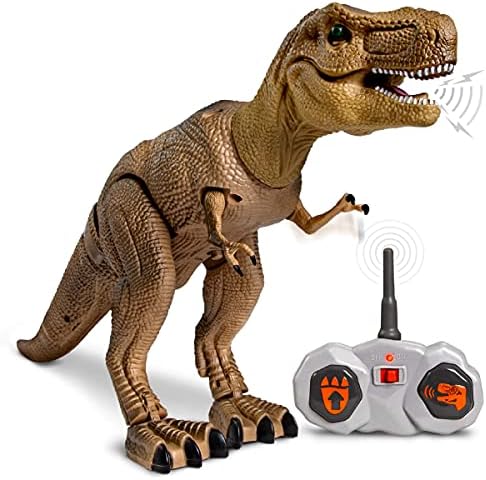 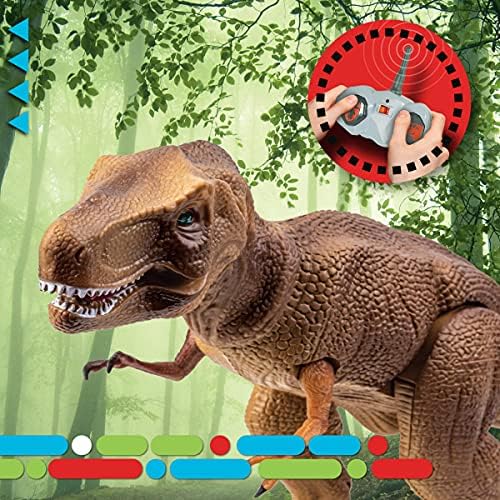 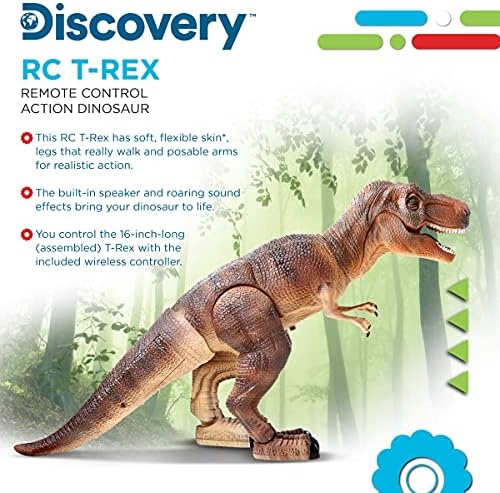 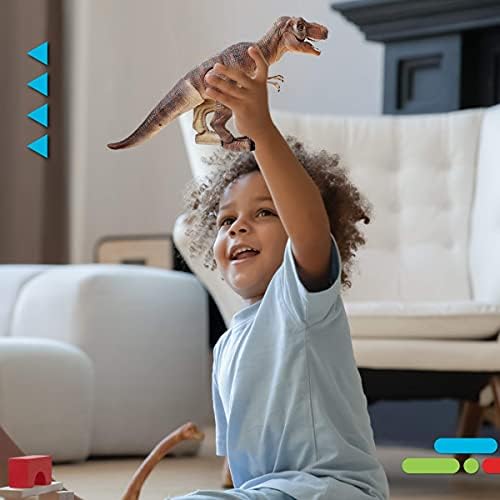 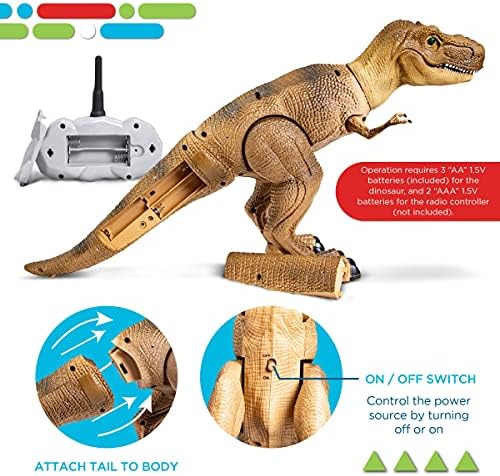 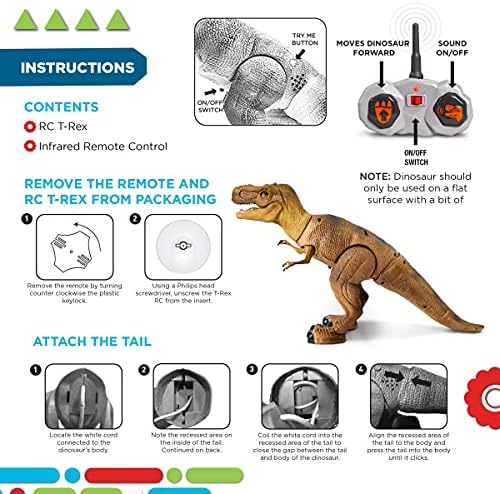 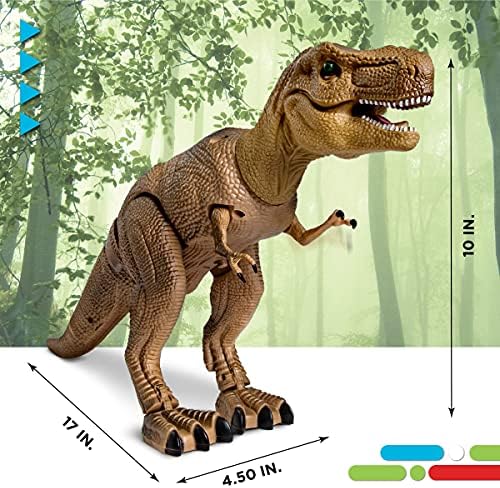 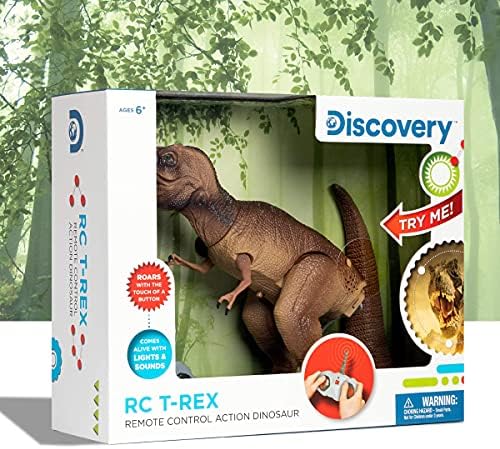 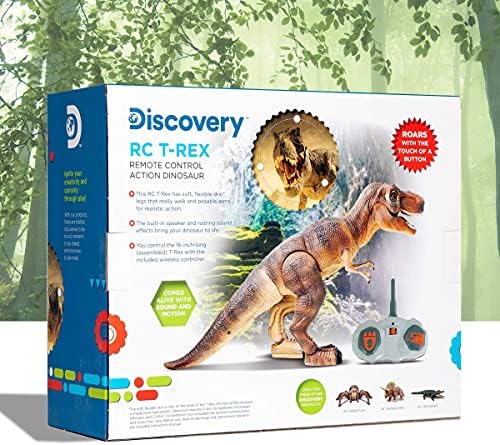 Bring the famous tyrannosaurus rex to life
Realistic details and exciting sound and movement effects bring the king of the dinosaurs to life! Use as an action figure on its own, or collect other Discovery Kids dinosaur figures to create a whole Jurassic kingdom!
Control the action with the Jurassic-themed remote control
The natural rock and fossil-themed remote control puts you in charge of the action! Make the dinosaur walk with the left button, and command it to roar and attack with the right button! The legs, arms, head, and neck all move with each step and roar!
Makes a great educational toy or gift idea!
Standing at 19 inches long when assembled, the dinosaur makes the perfect model for learning! Encourage your children to learn about natural history and the ages of the dinosaurs by using the t-rex model as an example. After playing with the remote controls, they’ll be eager to learn more about dinosaurs and all things paleontology!
Please note: included batteries are for demo purposes only and may need to be replaced before use.Features:
• Remote control lets you control the t-rex’s movement, roaring, and attacks
• Feet with wheels let the t-rex move across most surfaces
• Easy-to-use remote control great for children of most ages
• Assembly takes seconds; simply snap the tail in place
• Realistic details including soft flexible skin around the head and pebbled body
• Articulated jaw, arms, and legs
Package Includes:
• Motorized RC T-Rex Dinosaur w/ attached tail and 3 AA batteries for demo purpose only (please replace before first use)
• Remote control with movement and roar controls; requires 2 AAA batteries (not included)
Ready to rule the dinosaur kingdom? Click “Add to Cart” now!
BECOME KING OF THE DINOSAURS: Take control of the most famous and frightening of the dinosaurs: the regal t-rex! The Discovery Kids RC T-Rex brings the king of dinosaurs to life with exciting sounds, movement, and striking visual detail.
REMOTE CONTROLS PUT YOU IN CHARGE: The easy-to-use remote control is great for children, and lets them control the t-rex with two simple buttons. Ideal for young kids, the t-rex robot can be enjoyed by both boys and girls!
BRING THE T-REX TO LIFE WITH EXCITING SOUND AND MOVEMENT: Show off the t-rex’s ferocity with loud roars and lumbering movements! The t-rex’s feet have wheels for easy walking movement across tabletops and floors, while the sound button on the remote control makes the dinosaur unleash a frightening series of roars!
REALISTIC DETAILS: The t-rex action figure features realistic visual details, like the realistic soft skin around the head and neck. Pebbled skin details along the body, earth-toned gradients, and articulated arms and legs really bring the t-rex’s figure to life!
IMPORTANT INFORMATION: The dinosaur’s tail ships detached due to size; please read the enclosed instructions for how to attach the tail to the body. The tail attaches by snapping into place; it can detach with rough play. To prevent this, you may use a plastic-appropriate glue or sealant to permanently attach the tail to the body, if desired.

There are no reviews yet.

Added to wishlistRemoved from wishlist 0
Add to compare

Added to wishlistRemoved from wishlist 0
Add to compare
$29.99

Bodmart participates in the Amazon Services LLC Associates Program, which is an affiliate advertising program designed to provide a means for websites to earn advertising fees by advertising and linking to amazon.com

Affiliate Disclosure: As an Amazon Associate, we may earn commissions from qualifying purchases from Amazon.com. You can learn more about our editorial and affiliate policy.